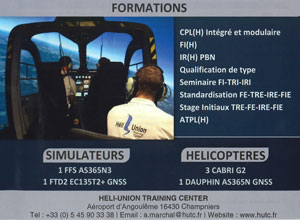 Since the end of 2017, Heli-Union decided to strengthen its structure by combining its Quality and HSE Department. By combining the expertise and brilliant brains from both teams, Heli Union is able to create a new department, Quality and Safety, led by Veronique… read more HUTC IS AWARDED CONTRACT BY THE SPANISH CIVIL GUARD Newly appointed as the Director of HUTC, who is Hervé Maugis and what will he bring to the company? BACKGROUND I started my helicopter pilot career in the French Army Aviation in 1988. Along this time, I participated to several overseas operations and involved… read more PBN Course Kick Off at HUTC

Learn about the most practical solution for the regulation of the new navigation system technology at Héli-Union Training Center in Angouleme! For any details, feel free to contact us at… read more 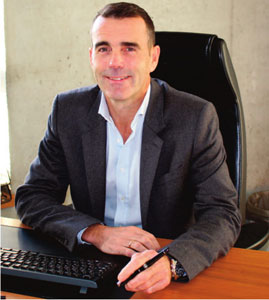 Heli-Union has been awarded a recognition award by Total E&P Myanmar during TEPM annual QHSE meeting in Yangon, Myanmar. The recognition award was granted to Heli Union in appreciation of no personnel injury and no incident within the 12 rolling months (May 2017… read more

As the Operations Manager responsible for operations of Heli-Union Gabon, Florent Thibaudet is not only a qualified Dauphin AS365N3 pilot, but he also manages daily tasks required to maintain operational excellence at Heli Union Gabon. As far back I can remember, I… read more Heli Union has just received one Leonardo AW139 helicopter to support its offshore helicopter operations in Africa. The market-leading intermediate twin-engine helicopter is leased from a renowned helicopter leasing company. The leased helicopter will operate on a new… read more

HELI-UNION will be showcasing its multi role H225 at the AFF and SAR EUROPE 2017 in Nimes, France. The events will take place from the 16th-20th of October 2017. The events gathers important international players in Aerial FIrefighting and Search and Rescue… read more HUTC HAS BEEN GIVEN THE OPPORTUNITY TO HOST AND TO TRAIN PILOTS FROM THE CAMEROON’S ARMED FORCES Earlier in March 2017, several pilots ofthe Cameroonese Army have just received their pilot licenses in HUTC. This remarks the end of the second training session for these… read more HELI-UNION SPENT AN AFTERNOON WITH THE GABONESE CHILDREN

Following the request of a non-profit organisation “ART ET VISION”, HELI-UNION went to a rural area in Port Gentil to meet the local children. The main objective of this encounter is to explain to the children, the profession and the responsabilities of a… read more The 10km POG marathon took place on the 24th of June 2018 in Port Gentil, Gabon for the second time. Gabonese President Ali Bongo Ondimba gave the starting signal for the running event. With more than 7000 runners participated in this event, among them is Leonard… read more Heli-Union is currently performing the first ever H725 (now called H225M) Major Overhaul in its 5000m² hangar in Toussus le Noble, where the Headquarters of Heli-Union is located. The H725 Caracal belongs to the French Air Force, is a twin-engine, long-range… read more

Jonathan Cosson, Heli-Union Deputy Managing Director shares his personal stories and how they led him to reach the position he holds today, together with his vision of what is behind Heli-Union’s strong heritage and future. BACKGROUND I started to work for Heli-Union… read more